Blarney Castle, as seen today, is the third to have been erected in this location. In the tenth century, a wooden structure was erected, but this was later replaced by a stone structure in c.1210 AD. Once again, this building was replaced by yet another structure. It was demolished for foundations and in 1446 the third castle by built by the King of Munster, Cormac McCarthy.

Cormac McCarthy, King of Munster, is said to have supplied 4,000 men from Munster to supplement the forces of Robert the Bruce at the battle of Bannockburn in 1314. As legend would have it, the latter king gifted half of the Stone of Scone to the King of Munster to show his appreciation. This, now known as the Blarney Stone, was incorporated into the battlements during McCarthy’s reign and it can now be kissed upon visiting Blarney Castle and Gardens.

During her reign, Queen Elizabeth commanded the Earl of Leicester to take possession of the castle, but any time he tried to discuss the matter with McCarthy, he would always suggest a banquet of some other form of delay. The queen was left sorely disappointed when the castle remained untaken. It is rumoured that the queen was so irritated that she remarked that the earl’s progress reports were all ‘blarney’.

Eventually, the castle was taken by Cromwell’s general, Lord Broghill. However, when his men entered the castle keep, he found that the main garrison had fled by the underground caves situated below the battlements. There are three passages, one leading to Cork, one to the lake and the last to Kerry.

Eventually, the estate was surrendered by Donogh McCarthy, 4th Earl of Clancarthy, and the property passed to the Hollow Sword Blade Company, who in turn sold it to Sir James St. John Jefferyes, Governor of Cork in 1688. His son, of the same name, was Minister Plenipotentiary for England at the court of Charles Battle of Poltawa. He was rewarded for his service with a full-length portrait of the king and a ruby gilted sword which he later sold in order to drain and improve his land surrounding the castle. At the turn of the eighteenth century, Sir James St. John Jefferyes built a gothic house up against the keep of the castle, which was common practice all over Ireland, at this point in time.

In 1820, the house was accidentally destroyed by a fire. The Jefferyes intermarried in 1846 with the Colthurst family of Ardrum, Inniscarra and Ballyvourney, Co. Cork, and Lucan, Co. Dublin. Lady Colthurst made the decision to build the new castle, after the fire, in Scottish baronial style, south of the present keep. In 1874, this new castle was completed and has been the family home ever since.

More information can be found on the Blarney Castle & Gardens website.

Cóbh, formerly known as Queenstown, is located on the south coast of Ireland in County Cork. Cóbh was the departure point for 2.5 million of the 6 million Irish people who emigrated to North America between the years 1848 and 1950, when the Irish Famine decimated the population and forced millions to emigrate in search of a better life, leaving behind family and friends.

On 11 April 1912, Queenstown was the final port of call for the RMS Titnaic as she departed for North America across the Atlantic on her ill-fated maiden voyage. Yet another famous ship has a connection to the port-town of Cóbh – the RMS Lusitania, which was sunk by a German U-Boat off the Old Head of Kinsale in May 1915. The survivors were brought to Cóbh and there are over 100 victims buried in the old church cemetery.

Cóbh, a picturesque town built on a steep hill on Great Island in Cork Harbour, is only 20 minutes from Cork city and there are hourly rail and bus connections to and from Cork city. Attractions for tourists include fishing, sailing and water sports, sites of historical interest and importance as well as boat excursions.

The Queenstown Story Heritage Centre is located in the old Victorian Railway Station, next to the Cobh Cruise Liner Terminal, approximately 200m from the town centre.

Whether you are interested in the Irish Emigration story, tracing your ancestors, or learning more about the ill-fated Titanic and the Lusitania, Cóbh Heritage Centre has it all, plus lots more. This informative, and often emotive, cultural centre is situated within the lovingly restored Victorian railway station, next to the Cruise Terminal.

The Emigration Story relates the maritime, naval and military history of the area and offers insights into the lives of those who left from the 1600s through to the 1950s. The exhibits explore the stories of early emigrants to Virginia, the Carolinas and Canada, the forgotten Irish who underwent forced labour in the West Indies during and after Cromwellian times, and the sinking of the Titanic and Lusitania. The Queenstown story offers visitors a glimpse into the past lives of Irish people and the hardships that those early emigrants experience on their journey and search for a better life. 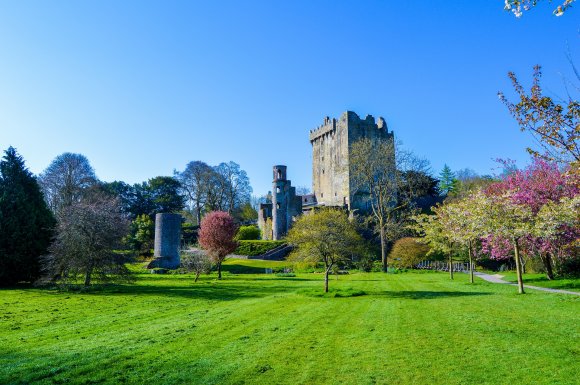