The Aran Islands, a group of 3 rocky islands located in Galway Bay, are essentially an extension of the sprawling karst landscape found in the Burren in County Clare, on Ireland’s west coast. The islands are rich in tradition, music and culture and Gaeilge (Irish) is the native, and indeed primary, language among the island dwellers.

While the three islands, Inis Mór, Inis Meáin and Inis Oírr, are unique in terms of their character, the drystone walls, windy roads, strangely shaped fields, breath-taking seascapes and prehistoric stone structures are common to all three.

The Aran Islands certainly offer a slower pace of living, something which grows increasingly more attractive to those of us surrounded by an ever-changing and rapidly moving society. The three islands offer an overwhelming sense of peace and tranquillity while also hosting some of the liveliest nights with traditional Irish music sessions in the local pubs.

The Aran Islands truly illustrate the beauty to be found in simplicity.

Inis Mór, the largest of the three islands, is home to several ancient stone forts and churches. The best known, and indeed largest, of which is Dún Aonghasa (Dun Aengus), a prehistoric stone fort built in c.1100BC. Semi-circular in structure, Dún Aonghasa rests on the edge of a cliff, some 100m above the ocean, and is deemed to be one of the best examples of its kind in Europe. Archeologists and experts in the field consider it to be one of the finest prehistoric monuments in Europe.

Excavations undertaken in the 1990s indicate that people had been living at this hilltop fortress since c.1500BC with the first walls and dwelling houses erected c.1100BC. The Chevaux de Frise (c.700BC), a densely packed network of jagged, defensive stones, surrounds the whole structure from cliff to cliff, and was intended to impede attackers.

As one of Ireland’s leading tourist attractions, Dún Aonghasa welcomes visitors from all over the world and offers tourists the opportunity to look out over the expansive Atlantic Ocean from atop a cliff and take in the breathtakingly spectacular views.

Upon arrival into Cill Rónáin harbour, you will have a clear view of the main village on the island of Inis Mór. This village is home to a mixture of Georgian style buildings, which date back to English colonialism, and both traditional and modern homes.

As the main village on the island, Cill Rónáin has many facilities available, from accommodation (hotel, hostel, guesthouses and B&Bs), restaurants, cafés, a tourist office, shops, pubs and a Spar supermarket, which has an ATM machine (something useful to know as there are not many located on the island). There is also a wonderful playground in CIll Rónáin, which is definitely worth a visit for families with children.

If you are lucky enough to be spending a day or two on Inis Mór, Cill Rónáin is the perfect spot to enjoy some lunch, have a drink and perhaps treat yourself to an authentic Aran Sweater.

Situated in the west of Inis Mór, the Seven Churches (or Dísert Bhreacáin) was for centuries one of the largest monastic foundations and centres of pilgrimage along Ireland’s West coast. St. Breacan is said to have arrived here in the 5th century AD from Kilbrecan in County Clare. Tradition has it that his foundation rivalled that of St. Enda, who had established his own foundation in the East of the island. It is believed that the two saints eventually decided to divide the island between them. While named ‘The Seven Churches’, there is in fact only two churches and several domestic buildings. So, it’s probably best not to expect seven churches lined up neatly in a row!

Teampall Bhreacáin (St. Brecan’s Church), a large multi-period church (c.8th-13th centuries), contains fine masonry with an impressive arch, nave and chancel. There is an inscription to be found on a stone in the west gable, reading ‘OR AR II CANOIN’ (‘Pray for the two Canons’). Teampall an Phoill (The Church of the Hollow), a 15th century church, is smaller and evidently simpler in terms of style. In the south east corner of the site, we find a number of interesting cross inscribed stones and graves. One of which has the words ‘VII ROMANI’ (‘The Seven Romans’) written on it and another reads ‘Tomas AP’ (‘Thomas the Apostle’). There once existed two Holy Wells on the site, Tobar an Spioraid Naoimh and Tobar Bhreacáin, which are now enclosed.

The Seven Churches are most definitely worth a visit for anyone interested in the history of Ireland and its spiritual and religious evolution.

Check out our tours that take in Inis Mór and its different attractions. 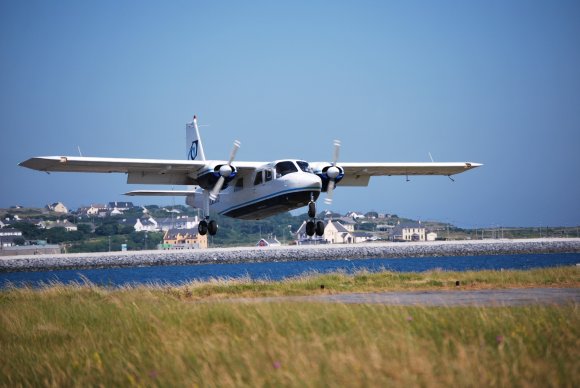