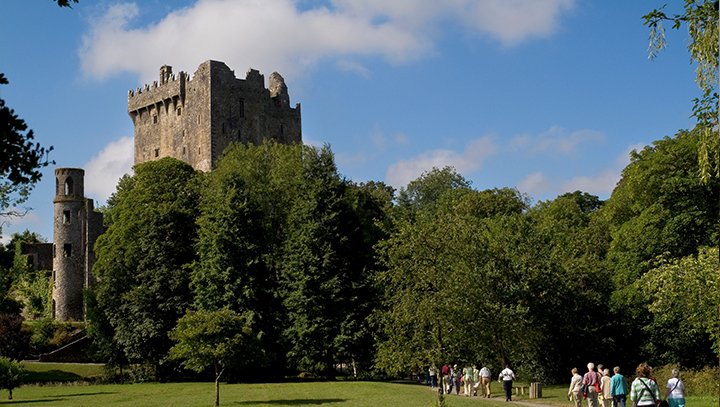 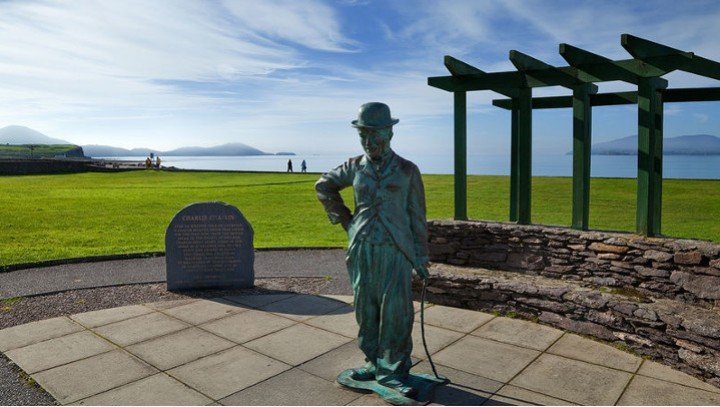 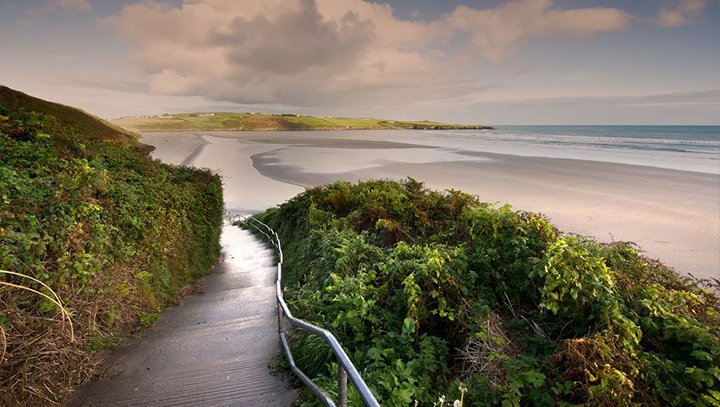 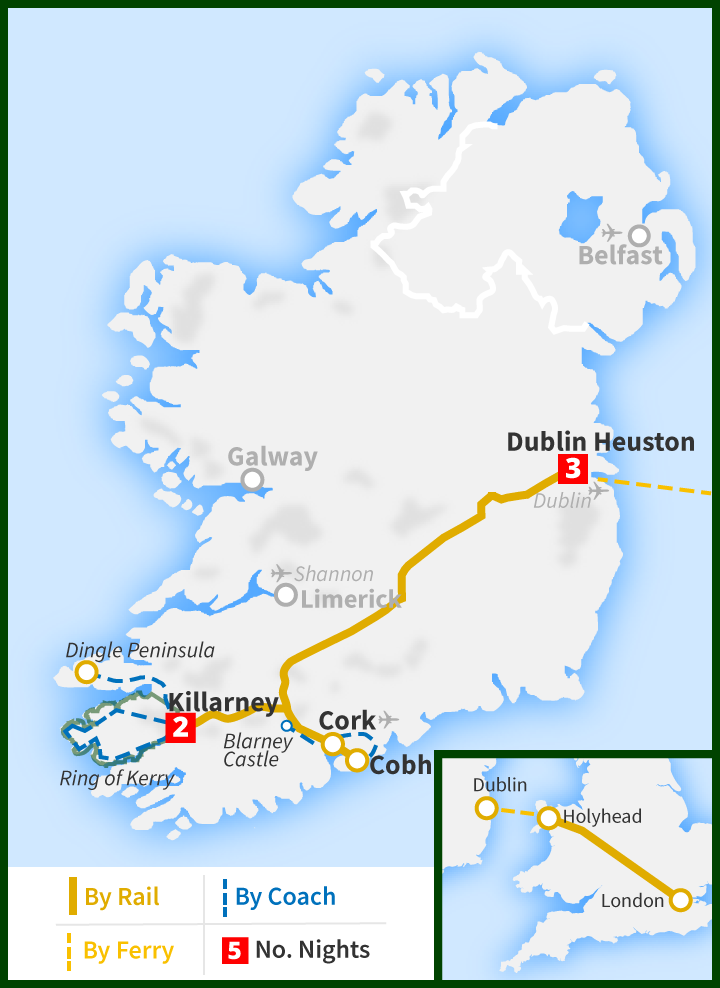 Travel from London to Dublin the eco-friendly way - via train and ferry, overnight in Dublin. Enjoy a three day tour to the South and South West of Ireland taking in Cork, Blarney Castle, The Queenstown Story and then based in Killarney, touring the Ring of Kerry along the Wild Atlantic Way. The Ring of Kerry is a 179-km-long circular tourist route in County Kerry, South Western Ireland. The tour takes in a day touring the Dingle Peninsula.

Check-in London Euston Station at the Network Rail Mobility Assistance Reception for 09:10 departure of your Train direct to Holyhead. You will be met by your Railtours Ireland host and escorted into your reserved seats. Your train, complete with snack car / bar will speed through the heart of England and along the North Wales coast to reach Holyhead in just 3 hours and 40 minutes. Holyhead rail station is also the cruise ferry terminal so after a short bus transfer to the berth you walk onto the ship – The Irish Ferries ‘Ulysses’ to Dublin, ship weighing 55,000 tonnes. Enjoy an invigorating 3 hours and 15 minute voyage across the Irish Sea to Dublin. Facilities on board ship include a range of restaurants and bars, a 2-screen cinema and a traditional promenade deck, from where you can enjoy the fresh sea air.
Arrive into Dublin 17:25pm where you will be welcomed by your Railtours Ireland host and transferred to your 3*/4* standard hotel in Dublin City Centre for a 2-night stay.

The popular Hop-On Hop-Off Tour, is offered with both live and multilingual commentary. All drivers are Failte Ireland approved, which means not only are they great story tellers, they're also brimming with information and history of Dublin's past, and will have you laughing all the way around the tour route too

Customer Service Desk at Heuston Station where our Check-In represenative will be in their yellow jacket!

Check-in for 07:00 departure from Dublin Heuston, opened in 1844 as the headquarters of the Great Southern & Western Railway and is now the official principal station of Iarnród Éireann, Ireland’s national railway company. As your train departs, we travel in a south westerly direction, through Dublin's western suburbs and then through the lush fertile countryside of Co. Kildare. Our journey takes us through the Curragh which is famous for its racecourse, home of the Irish Derby, and there are many stud farms in the vicinity. The final approach to Cork station is through Ireland's longest railway tunnel, which is a rather modest 1.2km.

09:35 Arrive into Cork Kent Station, we transfer to our Railtours Ireland tour coach through Cork City to Blarney Village and historic Blarney Castle, built in 1446 by Dermot Mc Carthy. You will have time to kiss the famous stone, which is said to bestow the gift of eternal eloquence on those lucky enough to do so. There is also time for shopping and lunch at Blarney and we recommend that you have lunch there, as this will be the only opportunity during the day to have a substantial meal.

13:30 Depart Blarney Castle. for Cóbh, via the city centre and a short city tour. Cork’s population is approximately 150,000 (Ireland’s 3rd largest city after Dublin and Belfast) and is the only city centre in Ireland that actually stands on an island, the River Lee divides and rejoins and either end of the city centre. It is also home to Murphy’s and Beamish, the Southern Capital’s rival to Guinness.

On arrival at Cóbh we will visit St Colman’s Cathedral. We will then proceed down along the sea front passing the former White Star Line offices en route to the beautifully restored Victorian railway station/transatlantic terminal. This is now the Cóbh Heritage Centre, home to the Queenstown Story. When Queen Victoria visited Ireland in 1849 she came to Cóbh and the town was renamed Queenstown in her honour –it was renamed Cóbh after Irish independence in 1922. Cóbh was of course the final port of call of the RMS Titanic and this theme is well expounded. The centre also houses much information about the Great Famine and subsequent Irish Emigration, 3 million Irish people emigrated from Cóbh, (principally to the United States) including Annie Moore, whose statue is located in front of the heritage centre. The Lusitania was torpedoed off the coast of Cork –marking the United States’ entry to the First World War and the small number of survivors were brought to Cóbh for refuge. Cóbh is also the headquarters of the Irish Navy and you will most likely see some navy ships.

An essential part of any visit to Ireland, this tour circles the magnificent MacGillycuddy Reeks and runs through its many passes and valleys along the shores of Dingle Bay and Kenmare Bay. There is an unspoilt nature to Ireland's most beautiful region and the Ring of Kerry provides many unforgettable memories as it passes through the many picturesque villages such as Glenbeigh, Waterville and Sneem and returns via Ladies View, the famous Lakes of Killarney and through the Oakwoods of Killarney's magnificent National Park. At the end of the tour you will be brought back to Killarney.

The Dingle Peninsula has the most rugged Atlantic coastline in Kerry and is scattered with forts and pre-historic huts such as the Gallarus Oratory. Much of Irish heritage is maintained in this Irish-speaking region including traditional music and art forms. Considered by many to have some of Europe's most spectacular scenery, the peninsula also supports both a rare and unique assortment of flora and fauna. Slea Head is the most westerly point in Europe and standing there, looking towards America, instills a feeling of excitement and empathy with the millions of emigrants who took this route.

There are splendid views around Slea Head, especially of the Blasket Islands and the scattered rocks.

The Great Blasket Island, evacuated in the 1950’s, produced a number of books in Irish –a best-seller, translated as 20 Years a Growing by Maurice O' Sullivan, and a masterpiece, The Island Man by Thomas O’ Crohan. In the 20th century some 60 books, mostly in Irish, have been written in the immediate area.

At the end of the day's touring you will be returned to Killarney Station for your return train to Mallow and onwards to Dublin which departs at 17:35. On arrival at Mallow, you will change to the intercity service to Dublin, departing from the adjacent platform.

Returning to Dublin Heuston at 21:00hrs.

Railours Ireland Host will transfer you to the Dublin Ferry Port