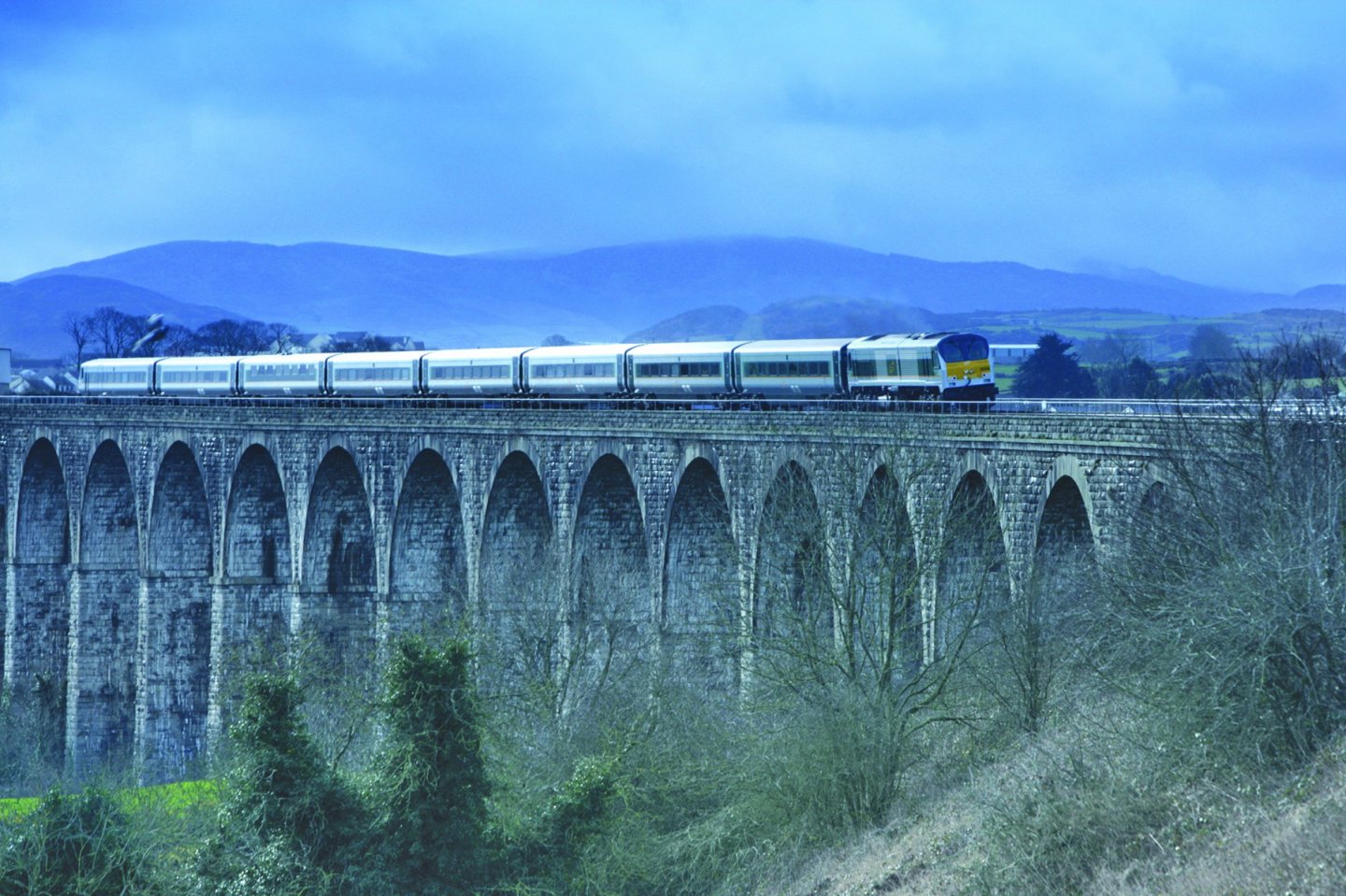 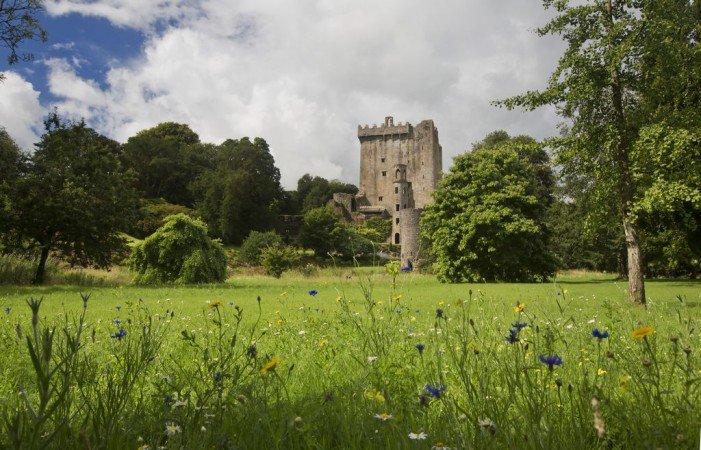 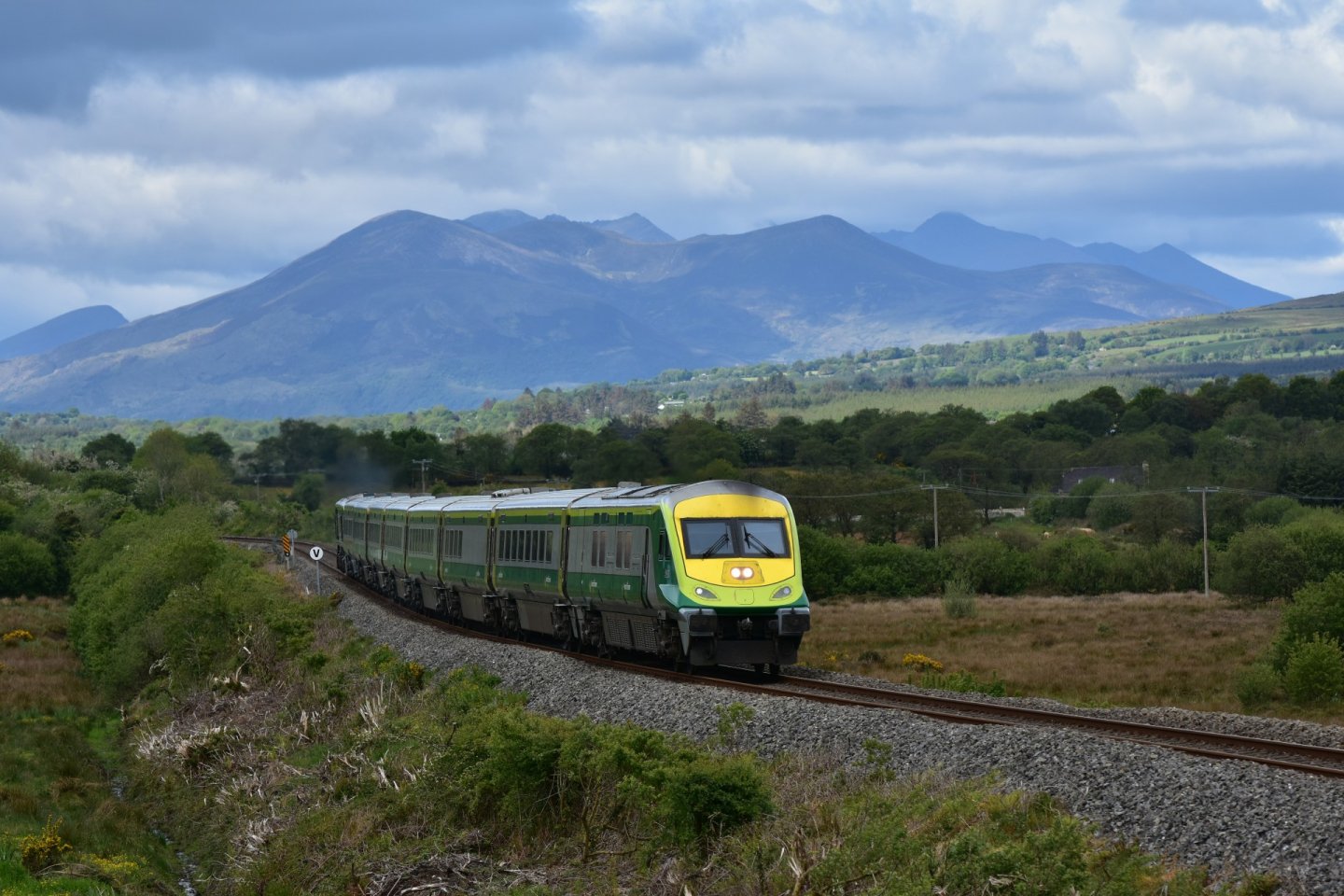 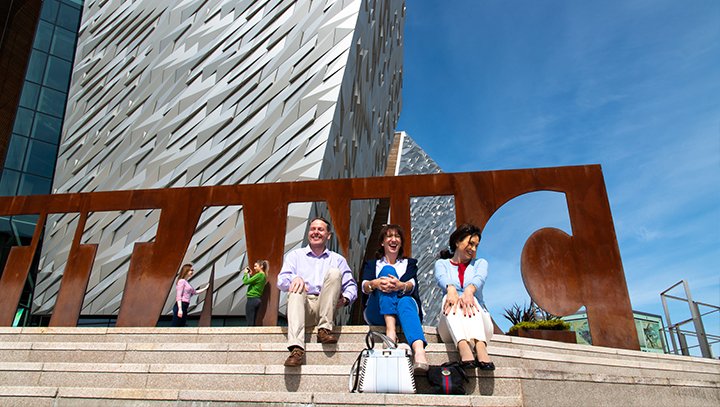 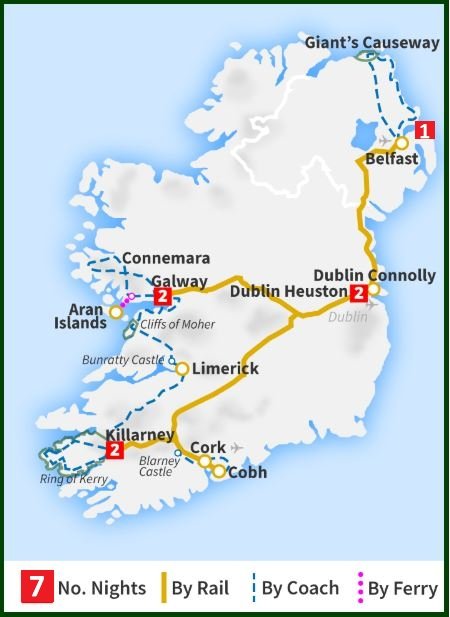 offering two nights in Killarney, two nights in Galway, two nights in Dublin and one night in Belfast.
This tour covers a large part of the Wild Atlantic Way and Causeway coast. We head South to visit Cork, Blarney Castle & the Ring of Kerry, West to the Cliffs of Moher, Connemara, the Aran Islands in Galway Bay and North to visit Belfast City, The Titanic Experience and the Giants Causeway.

Our original 6 day All Ireland tour can be viewed Here

Arrive into Cork Kent Station for 09:35, we transfer to our Railtours Ireland tour coach through Cork City to Blarney Village and historic Blarney Castle and Gardens, built in 1446 by Dermot Mc Carthy. You will have time to kiss the famous stone, which is said to bestow the gift of eternal eloquence on those lucky enough to do so. There is also time for shopping and lunch at Blarney and we recommend that you have lunch there, as this will be the only opportunity during the day to have a substantial meal.

On arrival at Cóbh we will visit St Colman’s Cathedral. We will then proceed down along the sea front passing the former White Star Line offices en route to the beautifully restored Victorian railway station/transatlantic terminal. This is now the Cóbh Heritage Centre, home to the Queenstown Story. The centre also houses much information about the Great Famine and subsequent Irish Emigration; 3 million Irish people emigrated from Cóbh (principally to the United States) including Annie Moore, whose statue is located in front of the heritage centre.

An essential part of any visit to Ireland, this tour circles the magnificent MacGillycuddy Reeks and runs through its many passes and valleys along the shores of Dingle Bay and Kenmare Bay. There is an unspoilt nature to Ireland's most beautiful region and the Ring of Kerry provides many unforgettable memories as it passes through the many picturesque villages such as Glenbeigh, Waterville and Sneem and returns via Ladies View, the famous Lakes of Killarney and through the Oakwoods of Killarney's magnificent National Park. At the end of the tour you will be brought to the railway station at Killarney.

After the visit to Bunratty Castle and Folk park we make our way to Co. Clare. There is a lunch stop at O’ Connor’s Pub in Doolin before arriving at the Cliffs of Moher, among the highest sea cliffs in Europe. There is plenty of time to visit Ireland’s second most popular tourist attraction and your host will advise you of the departure time. From here we take the coast road for much of the way to Galway, with time for photos along The Burren. This is a national park and the word Burren comes from the Irish Language, it means ‘rocky place’. It is a unique lunar landscape of limestone which was described in 1649 by one of Oliver Cromwell’s men as: “No tree to hang a man, no water deep enough to drown him and no soil deep enough to bury him”. Today the Burren is noted for its diverse Flora with few parallels elsewhere in Ireland or, indeed, Europe. We continue along the coast road to Black Head, passing the quaint coastal villages of Ballyvaughan and Kinvara before joining the main road to Galway. At the end of the day the coach will set you down at Eyre Square in the centre of Galway City adjacent to your hotel (and the railway station). You will be directed to your hotel by your host and your evening is free in Galway.

Enjoy your full Irish Breakfast, check out of your hotel.

10:05 Depart from Galway Train Station and our conducted tour of Connemara leaves Galway to the village of Moycullen. From Moycullen the road rises and falls towards the lovely village of Oughterard on the shores of Lough Corrib, traditionally regarded as Ireland’s premier angling centre. Now the gateway to Connemara opens, and the breathtaking colours of this unspoilt countryside are revealed in all their natural splendour. At Maam Cross, the Connemara "crossroads", there is a replica of the cottage used in the 1950s John Wayne and Maureen O'Hara film "The Quiet Man", which was filmed here. From Maam Cross our tour heads out to Leenane, Kylemore Abbey and Letterfrack, in the shadow of purple mountains rolling down to blue and green rocky valleys, reflecting the rich and varied colours of Connemara. There is a lunch break at Kylemore Abbey and Gardens, an 18th century castle now owned by the Benedictine nuns who run an excellent pottery, gift shop and restaurant here. Letterfrack is one of Ireland’s major national parks. The colourful town of Clifden has been one of Ireland's leading holiday resorts for generations. It is an excellent touring centre beloved by the walker, the biker, the hiker or the fisherman. It was here too, at Derrygimlagh Bog, near Clifden that aviation history was made when Alcock and Brown crash landed after their historic transatlantic flight in 1919.

Back at Maam Cross again and the road turns southwards now through the Screeb, Costello and Rossaveal. Rossaveal is the departure point for ferryboats to the Aran Islands and is also a major fishing port. We are now in the Gaeltacht, or Irish speaking area, of Connemara, where Gaelic or Irish is still the everyday spoken language of a bilingual people.

Our tour of Connemara heads homewards towards Galway City now, along the shores of Galway bay, through the Gaeltacht villages of Inverin and Spiddal and looking out across the blue waters of the Atlantic at the unique limestone of the Burren and the hills of Clare. After your day's touring you will be returned to Galway Station. Upon arriving at Galway Station please present your Railtours Ireland ticket and travel pack at the ticket barrier and you will be directed to your reserved seats on the train, where you host will be waiting for you.

Depart Galway City for transfer to Inis Mór, the largest of the three Aran Islands. Irish is the spoken language on the Aran Islands, although the locals will be more than happy to speak to you in English. For many, the highlight of the tour is the formidable pre-Christian fort of Dún Aonghusa, with spectacular sea-cliffs on the western side and unspoilt views of the Atlantic Ocean. Transfer times may vary seasonally.

Please note: Should weather conditions be such as to curtail transfer to the island you will be issued a refund for this portion of the tour.
No further refund is available for any reason.

Depending on your day of departure tours on Day 4 and Day 5 may be reversed.

Enjoy your full Irish Breakfast at Leisure and check out of your hotel.

On arrival in Belfast Central Station we will transfer you to your 4 star Hotel.

Join the Hop On-Hop Off City Sightseeing tour that visits all of the city's major attractions including the Titanic Experience - one of the worlds leading visitor attractions.

Your evening in Belfast is free to enjoy.

Leaving Belfast we proceed to the town of Carrickfergus for a short photo-stop and take the coast road north from here. We continue on passing the coastal villages of Glenariff, Cushendall and Cushendun. There are stunning views of the sea to the right and the mountains or the Glens of Antrim to the left; you can even glimpse the Scottish coast on a clear day.

Our next stop is the famous Carrick-a-Rede Rope Bridge. Traditionally fishermen erected the bridge to Carrick-a-Rede Island over a 23m-deep and 20m-wide chasm to check their salmon nets. Today visitors are drawn here simply to take the rope bridge challenge!

Lunch stop is at Fullerton's Bar/Restaurant in Ballintoy – lunch is not included and as part of the tour cost.

After lunch, we continue on to Bushmill's Whiskey Distillery, time dependent, where we have a quick 20 minute photo stop. The distillery shop is located here if anyone wishes to purchase some souvenirs.

We then head for Dunluce Castle for a photo stop before arriving at the Giant’s Causeway where you can follow in the Footsteps of Giants at what many consider the 8th Wonder of the World and a UNESCO World Heritage site, where we stop for about 2 hours.

Leaving the Giant’s Causeway, we head back to Belfast city our train to Dublin.