Off to Inis Mór (Inishmore) - meaning 'the big island' 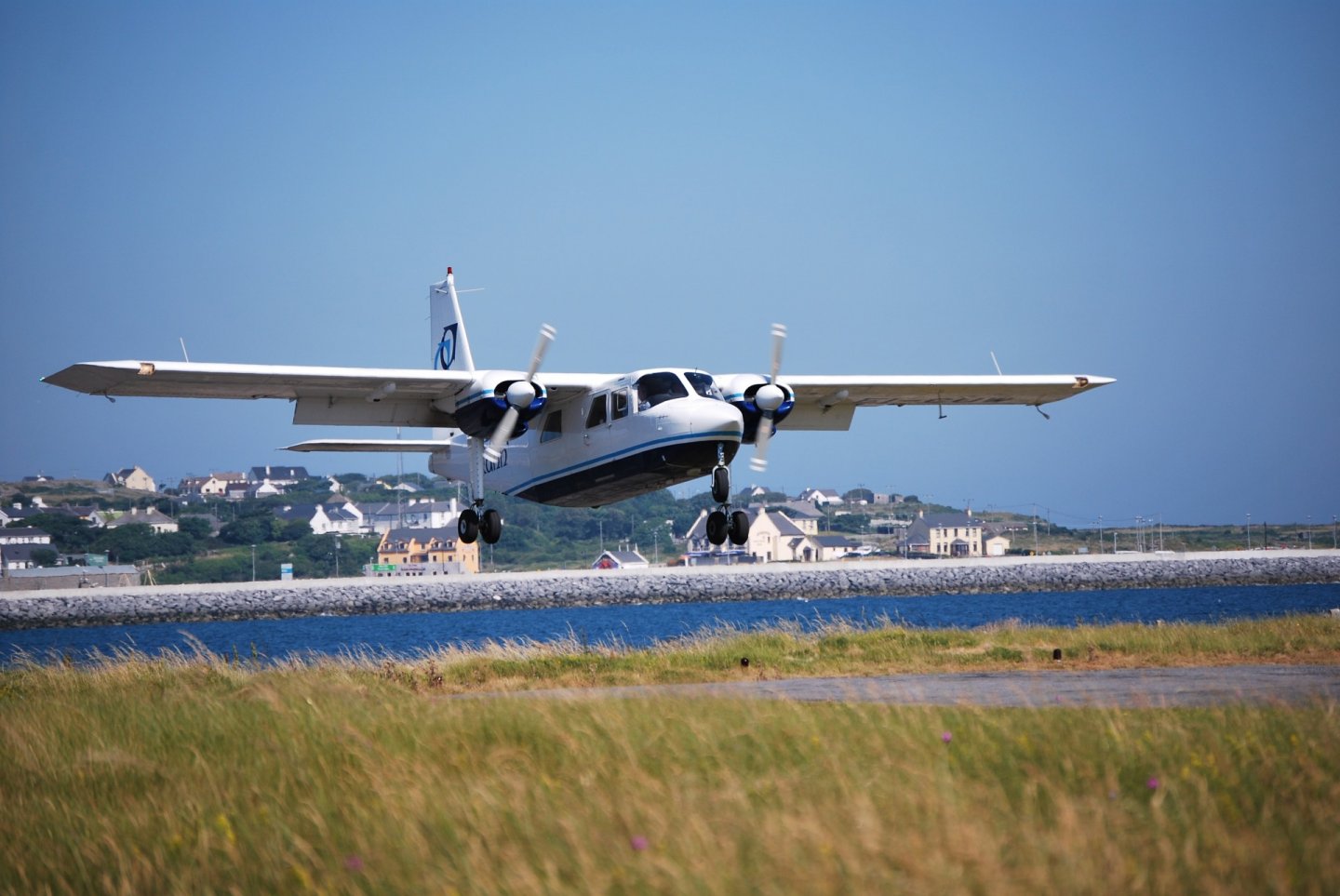 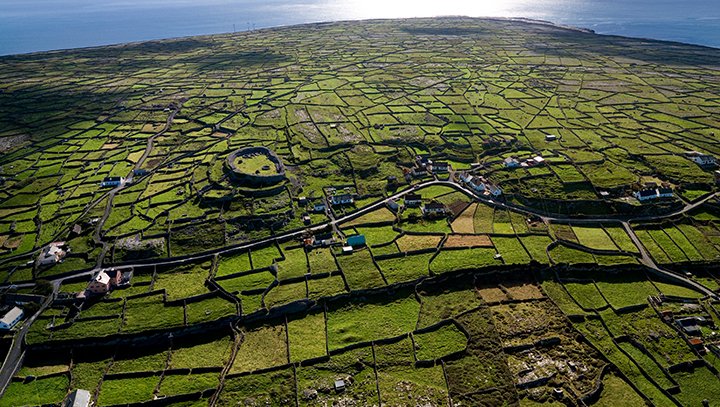 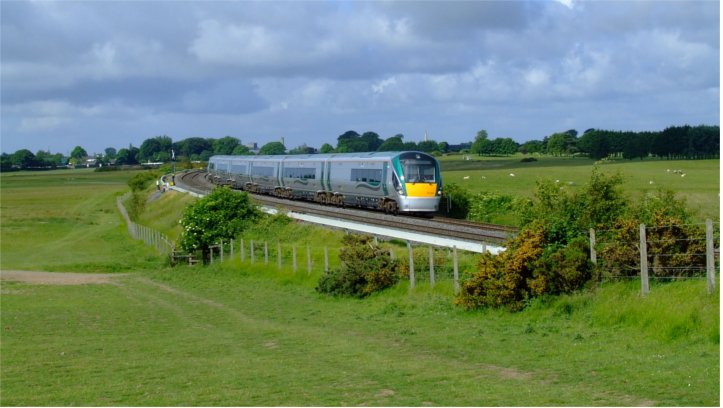 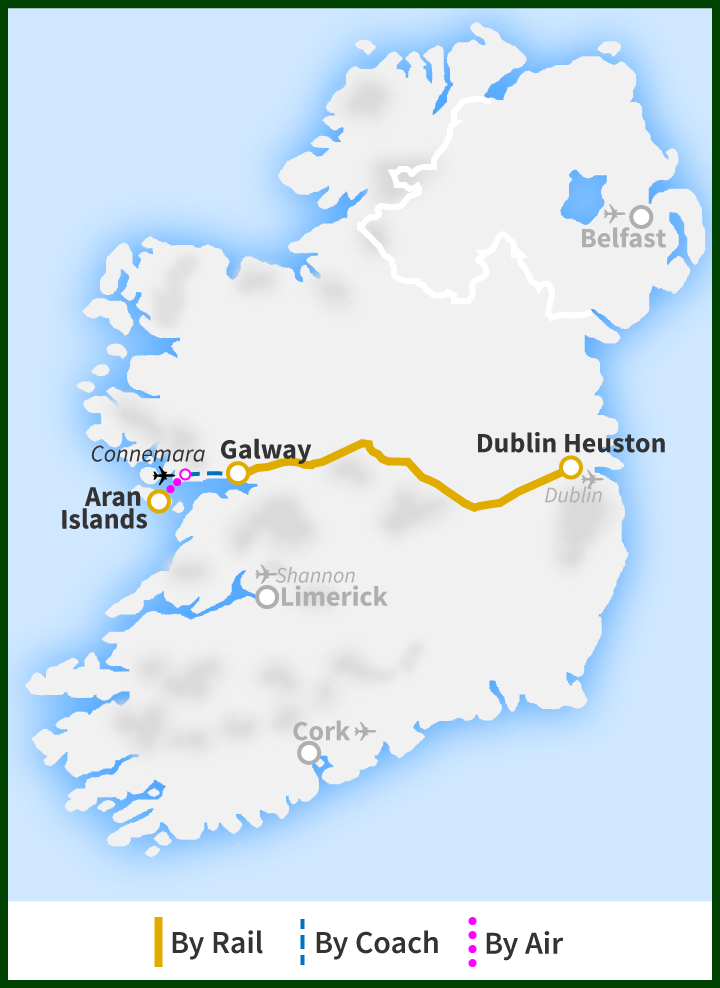 This one-day tour from Dublin offers a unique opportunity to visit Inis Mór, the largest of the three Aran Islands and one of the most popular vacation destinations in Ireland. Set on the West Coast of Ireland in the mouth of Galway Bay, Inis Mór is a bastion of traditional Irish language, culture and music, unique in its geology, archaeology and history.

Check in for 07:35 departure from Dublin Heuston Station, opened in 1844 as the headquarters of the Great Southern & Western Railway and is now the official principal station of Iarnród Éireann, Ireland’s national railway company. As your train departs, we travel in a south-westerly direction, through Dublin's western suburbs and then through the lush, fertile countryside of Co. Kildare. Our journey takes us through the Curragh which is famous for its racecourse, home of the Irish Derby, and there are many stud farms in the vicinity. Your route takes you into the midlands and the Bog of Allen, vast tracts of peat-land. We pass through the County Town of Tullamore and then to Clara across the gentle farmlands of north Offaly. The train crosses the Shannon River which marks the historic border between the province of Leinster and Connacht – the historic province of the West of Ireland. You are now heading due west, surrounded by peat bog on both sides of the line. On the last few kilometres before Galway, you will get your first glimpse of Galway Bay.

Arrive into Galway where you will be brought to the Aer Arann mini-coach for transfer to Connemara Airport for your short flight to Inis Mór. Irish is the spoken language on the Aran Islands, although the locals will be more than happy to speak to you in English. For many, the highlight of the tour is the formidable pre-Christian fort of Dún Aonghusa, with its spectacular sea-cliffs on the western side and unspoilt views of the Atlantic Ocean.

Flight times may vary occasionally to cater for the numbers flying.

Your tour of Inis Mór begins and ends at the island's airport and includes stops at 'The Seven Churches' (15 minutes), Dún Aonghusa (75 minutes) and Kilronan village for lunch (45 minutes).

On arrival back at Galway you will be brought to the Tourist Office. You now should have some time in Galway city centre for exploring and/or shopping.

Please note: Should weather conditions be such as to curtail flights you will be taken on an alternative tour to Connemara and refunded the difference.
No further refund is available should you decide not to go to Connemara for any reason.

Check out this tour taking you to the West of Ireland from London.

Reviews
“This is a very unique tour and now I can check it off my bucket list” Apr 2016 by Angela C
“This was awesome! Well worth the time” Jun 2015 by Coledude
“The train trip was amazing and we had the best escorts!” Mar 2015 by Tina K
“It was absolutely amazing. This trip was my dream because stone walls...” by Yaclin
X
Cookies on our website:
This website uses cookies.
I'm OK with this Cookie Settings ?