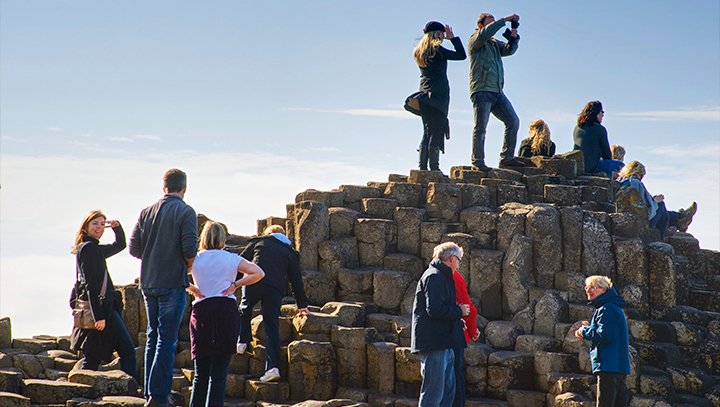 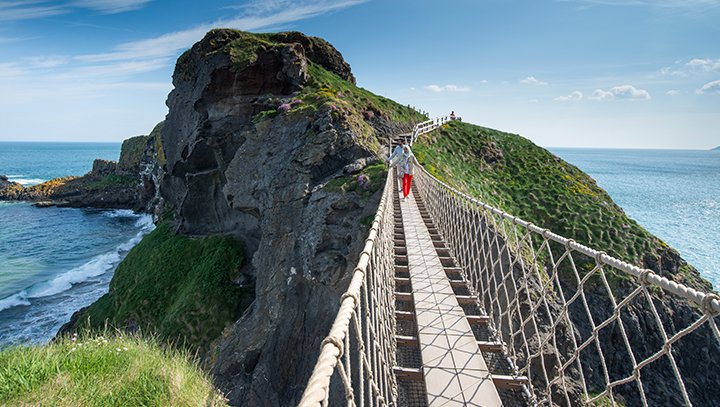 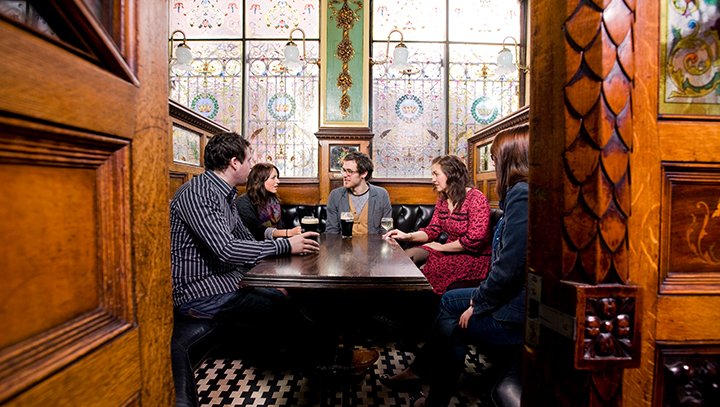 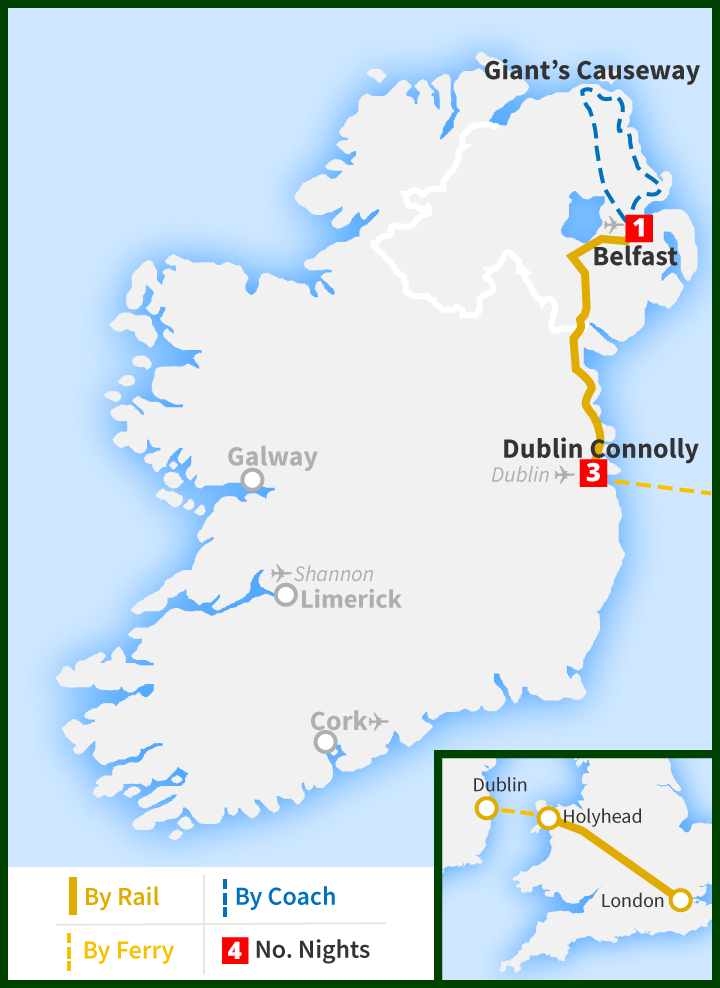 Travel from London to Dublin the eco-friendly way - via train and ferry, overnight in Dublin. Enjoy a fascinating day out to the famed Antrim coast with its spectacular seascapes taking in the Giant's Causeway and Dunluce Castle. Rail travel Dublin - Belfast - Dublin by "Enterprise Express".

Check-in London Euston Station at the Network Rail Mobility Assistance Reception for 09:10 departure of your Train direct to Holyhead. You will be met by your Railtours Ireland host and escorted into your reserved seats. Your train, complete with snack car / bar will speed through the heart of England and along the North Wales coast to reach Holyhead in just 3 hours and 40 minutes. Holyhead rail station is also the cruise ferry terminal so after a short bus transfer to the berth you walk onto the ship – The Irish Ferries ‘Ulysses’ to Dublin, ship weighing 55,000 tonnes. Enjoy an invigorating 3 hours and 15 minute voyage across the Irish Sea to Dublin. Facilities on board ship include a range of restaurants and bars, a 2-screen cinema and a traditional promenade deck, from where you can enjoy the fresh sea air.
Arrive into Dublin 17:25pm where you will be welcomed by your Railtours Ireland host and transferred to your3*/4* standard hotel in Dublin City Centre for a 2-night stay.

The popular tour, the 2 day Hop-On Hop-Off Tour, is offered with both live and multilingual commentary. All drivers are Failte Ireland approved, which means not only are they great story tellers, they're also brimming with information and history of Dublin's past, and will have you laughing all the way around the tour route too

07:35 Depart Connolly Station, which was built in 1844 as the terminus of the Dublin & Drogheda Railway and is now the administrative headquarters of Iarnród Éireann, Ireland’s National Railway.

We depart northwards through the Dublin suburbs, which soon give way to farmland. Soon we pass the exclusive coastal village of Malahide before we cross the wide Broadmeadow Estuary, followed by Rogerstown Estuary. Fine views of the sea appear as we pass through the coastal town of Skerries, followed by the fishing village of Balbriggan. A few kilometres further on we pass Gormanston, an Irish Air Corps military airfield –on the landward side. Red flags on the seaward side indicate military exercises are in progress. We travel through Drogheda. Immediately north of Drogheda we cross the historic river Boyne by a magnificent viaduct, with great views of the town. It was here that Oliver Cromwell put the entire population to the sword in 1649. At little further upstream is the site of the Battle of the Boyne, where [Protestant] King William of Orange defeated dethroned [Catholic] King James in 1690 –an event which is still celebrated annually by ‘Orangemen’ or ‘Northern Protestants’ on the ‘Twelfth’ of July.

We now begin to climb into the foothills of the Camlough Mountains and border country.

Leaving Belfast we proceed to the town of Carrickfergus for a short photo-stop and take the coast road north from here. We continue on passing the coastal villages of Glenariff, Cushendall and Cushendun. There are stunning views of the sea to the right and the mountains or the Glens of Antrim to the left; you can even glimpse the Scottish coast on a clear day.

Our next stop is the famous Carrick-a-Rede Rope Bridge. Traditionally fishermen erected the bridge to Carrick-a-Rede Island over a 23m-deep and 20m-wide chasm to check their salmon nets. Today visitors are drawn here simply to take the rope bridge challenge!

Lunch stop is at Fullerton's Bar/Restaurant in Ballintoy – lunch is not included and as part of the tour cost.

After lunch, we continue on to Bushmill's Whiskey Distillery, time dependent, where we have a quick 20 minute photo stop. The distillery shop is located here if anyone wishes to purchase some souvenirs.

After enjoying a Full Irish Breakfast (the famous Ulster Fry) at your leisure.

The Hop-on Hop-off city tour provides you with a comprehensive look at this very special city. Your ticket is valid for 48 hours, to allow you to explore every area and district of this unique place.

Railours Ireland Host will transfer you to the Dublin Ferry Port

Reviews
“Thank you for a very successful visit to Ireland” by Helen, UK
“A great way to see countryside and castles” by Jomara Texas